FACE OF THE INSPIRER 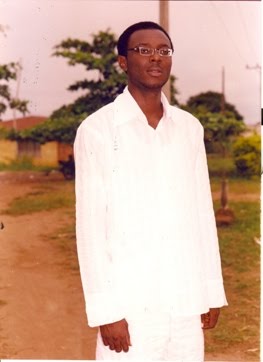 FBI accepts invitations to speak in private, public or corporate events. Reach him directly on 07037162029.
Posted by FIRST BABA ISA at 6:34 AM No comments:

FEW MEN HAVE VIRTUE TO WITHSTAND THE HIGHEST BIDDER

Honesty and integrity will lead ultimately to happiness and security. To succeed and enjoy success, we don’t need only ability, we need dependability. When Robert Morse died, his entire estate amounted to $59, 000 after 40 years as Director of Public Works in New York City. Millions of dollars had passed through his office.
At 24, Abraham Lincoln served as the post master of New Salem, Illinois, for which he was paid an annual salary of $55.70. Even then, years before he entered the White House, the rail splitter was showing the character that had earned him the title “Honest Abe”.
The New Salem post office was closed in 1836 but it was several years before an agent arrived from Washington to settle accounts with an ex-postmaster, with ex-postmaster Lincoln. Abe was a struggling lawyer. The agent informed him that there was $17 due to government. Lincoln crossed the room, opened an old trunk and took out a yellowed cotton rag bound with string, untying it, he spread out the cloth and there was the $17. He had been withholding it, untouched for all those years, “I never use any man’s money but my own”, he said.
When Andrew Johnson was 14, his mother had to go aboard a warship at Charleston to serve as a nurse. She feared she might not return and left this note for her son: “Andrew, if I should not see you again, I wish you to treasure up and remember some things. In this world you will have to make your own way. To do this you must have friends. You can make friends by being honest, keep them by being steadfast”.

Be among the “Few men that have virtue to withstand the highest bidder” – George Washington
FBI accepts invitations to speak in private, public, religious and corporate events. You can reach him directly on +2347037162029
Posted by FIRST BABA ISA at 1:20 AM No comments:

THANK GOD I AM AN ASS
St John Vianney was not brilliant but he had a ready wit. In his theology examination he was cutting a bad figure. The professor who was examining him grew impatient and said: “This fellow is a complete ass. What can we do with him?” And John answered: “Mr Professor, if Samson, armed with only the jaw bone of an ass, could kill 1000 philistines, then what should God not be able to do with a complete ass?!”
Don’t let anybody write you off. God is not through with you yet. Don’t let anybody fool you; you are better than your grades, or what your parents or boss said. I thank God I am an ass, I will become a weapon in His hands; I am nothing, He will make me something; I am foolish. He will use me to confound the wise; I am weak, He will use me to shame the strong! CELEBRATE YOU!

FBI accepts invitations to speak in private, public, religious and corporate events. You can reach him directly on +2347037162029
Posted by FIRST BABA ISA at 1:48 AM No comments:

WHO IS THE FOOL?

WHO IS THE FOOL?
Henry Ward Beecher, the noted preacher once received an envelope. On opening it he found a sheet of paper with one word written in the centre: “FOOL”. Beecher forthwith made a public announcement that he had received several letters to which the writers had forgotten to sign their names, but that this was the first instance in which the writer has signed his name while forgetting to write the letter itself.
Hey, you are not insulted until you accept you are. It is not happens to you but how you respond that matters.

FBI accepts invitations to speak in private, public, religious and corporate events. You can reach him directly on +2347037162029
Posted by FIRST BABA ISA at 1:31 AM No comments:

HE SACRIFICED HIS SON

TO GET HOLD OF SUCCESS, YOU MUST DECIDE WHAT YOU MUST LET GO

King Alfonso of Spain was both courageous and strategic in defending the capital against the Mohammedan besiegers. But by some fluke the enemy succeeded in kidnapping the King’s son.
The Sultan had a gallows built in full view of the city. He then forced the Prince to mount it. And the King received the message: “Alfonso, either the city of your son!”
A breathless silence descended on the court. Everyone watched the King’s face. Will he allow his people to be murdered or will he give up his dear son? King Alfonso was not long in deciding. The Sultan received the prompt reply: “Let my son die that my people may live.”
Now that’s sacrifice. The very virtue you must practice to achieve success. You have got to let some things go: some habits, some relationships, and some culture. It may be “dear” to you, but if it is a stumbling block to your success, chop it off; even if you have to do that with tears.

TO GET HOLD OF SUCCESS, YOU MUST DECIDE WHAT YOU MUST LET GO
FBI accepts invitations to speak in private, public, religious and corporate events. You can reach him directly on +2347037162029
Posted by FIRST BABA ISA at 1:29 AM No comments:

THE GOOD CROWN OF SUCCESS ALWAYS GOES TO HIM THAT FIGHTS THE BEST
The Flemish and the English were defeated at Bouvines by King Philippe-Auguste of France in the year 1214. Before the battle the King had ordered an altar to be erected in the middle of the camp. The King then placed his crown on it with the inscription: “Au plus digne” – “To the worthiest”.
Turning to his lords and knights, the king declared “He who fights the best and wins the day shall be king; I waive all my rights, and will have none but those you give me tonight”.
During the battle he fought like a lion. At the close of the battle his surviving nobles gathered around the altar and shouted, “Thou O King, art the most worthy”. They gave him back his crown.
Life’s rewards go “Au plus digne”. Fortune is no respecter of persons, colour, race, creed or tongue. Her anthem is always: “He who fights the best… shall be king”.
Life will not pity you and say “Hey, you there, you are so beaten and broken, come have it”. No way. If you want “it” that bad, then get up, stand up, and fight. General Douglas
MacArthur, the Great War hero, said, “In war there is no substitute for victory”.
DON’T ACCEPT ANY SUBSTITUTE FOR VICTORY
FBI accepts invitations to speak in private, public, religious and corporate events. you can reach him directly on +2347037162029
Posted by FIRST BABA ISA at 1:20 AM No comments:

MEN DO NOT FAIL. THEY JUST GIVE UP EASILY.
On his voyage to discover , day after day no land appeared; again and again his sailors threatened mutiny, persuading him to turn back. Christopher Columbus refused to listen to their entreaties and entered each day in the ship’s log book these two words: “Sailed on!”
They sailed on. They reached their goal. If he had turned back, nobody, probably, would have known .
You might have been holding on for so long, with no sunshine in sight. Have you read all the books, listened to all the tapes, attend all the seminars, follow all the rules and work real hard without achieving it? Then the best thing to do right now is: Don’t Give Up! “Oh, same old news”. I agree; but its not just old news. Its old news, good news, new news and only news: that’s if you want to achieve success.
Holman Hunt, who painted “The light of the world”, was once asked by an admirer, the technique of drawing freehand circles as perfect as his. “All you need to do “ he replied, “is to practice eight hours a day for forty years”.
MEN DO NOT FAIL. THEY JUST GIVE UP EASILY.
- Bill Newman
Posted by FIRST BABA ISA at 4:07 AM No comments:

FIRST BABA ISA
I AM DESIGNED AND PROGRAMMED TO HELP PEOPLE, ORGANISATIONS AND NATIONS ACHIEVE SUCCESS AND EXCELLENCE.